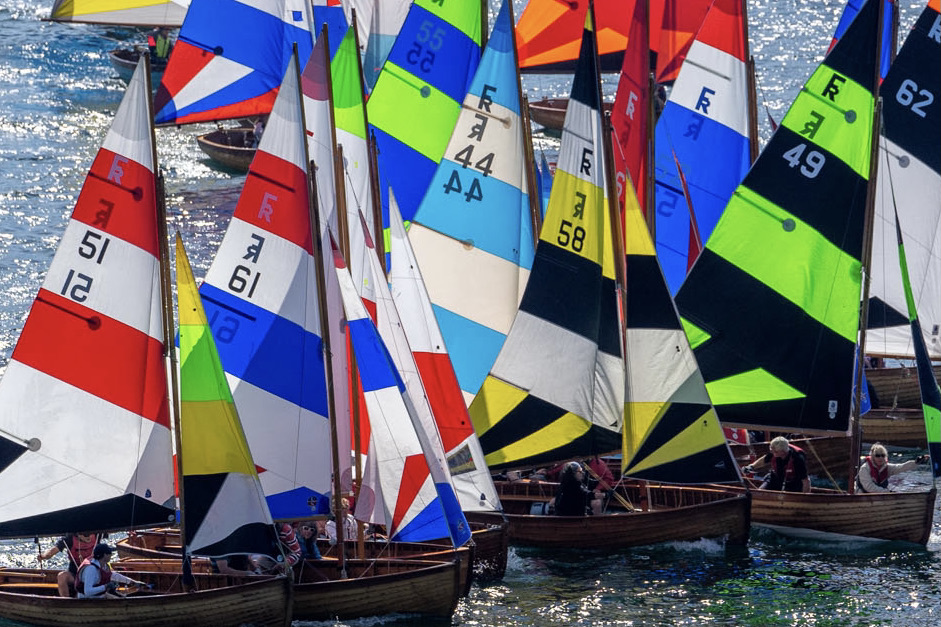 The 2021 (6th) Fowey River Championships took place over three days of the Whitsun weekend. Held in the Fowey estuary and the bay outside and hosted jointly by Royal Fowey Yacht Club and Fowey Gallants Sailing Club the format for the event was set to test different styles of racing with each day being different. Twenty-five boats took part and enjoyed a mainly sunny event with seven races completed. After last years cancellation crews were very excited to be back and the competition was intense through the fleet.

On Saturday, after a short postponement, the fleet made its way out of the harbour in anticipation of some windward-leeward races. Each time the line was set and a course laid the wind would shift or die away leading to an even longer postponement. Just before midday the decision was made by principal race officer, James Dowrick, to postpone all racing and return to harbour to see if any wind would arrive to make it possible to race in the afternoon. Although the wind remained light out of the harbour a breeze did fill in inside and a single race around the harbour was held. This was essentially the 'long distance' race that had been planned as one of the days- although in the light wind it was more of a 'long time' affair! The wind was from the north west and, as is the way in such breeze in Fowey Harbour, very shifty and this made for some interesting (frustrating) place changes at times. However at the end of the race the top three all made their mark for the days to follow. Andy and Suzy Matthews in Fr53 'Kingfisher' took the gun followed by Philip and Sian Henson in Fr68 'Zethar' and Kate Arter and Adrian Bishop in Fr55 'Wild Bird'. Saturday evening was the championships dinner held at Royal Fowey Yacht Club and thirty six sailors sat down to enjoy a fabulous socially-distanced three course feast.

Sunday dawned more promising with a light breeze mainly from the east. A number of windward-leeward races were planned to be run back-to-back and in the end four races were duly completed. The light easterly wind created a short chop requiring a lot of concentration to steer through it and maintain decent boat-speed. In the first race 'Kingfisher' and 'Zethar' reversed Saturdays positions with Terry and Brenda Cole in Fr70 'Gabiano' coming in third. After two races not going quite their way David and Alison Rundle in Fr63 'Kittiwake' won the second race of the day followed by David Gamble in Fr39 'Victory and 'Kingfisher'. 'Zethar finished fourth in what turned out to be their worst finish of the series (and a discard). Before race three the breeze and chop built a little more and the writer retired for the day to get his sea-sick five year old daughter ashore. The third and fourth races saw the same top three in both races 'Zethar', 'Wild Bird' and 'Kitiwake'. After racing many of the fleet made their way to Polruan in the afternoon to enjoy a beer of two and relax after what was a tiring day on the water but with everything to play for on the last day.

The final day was also club racing for the other fleets of Fowey and to help co-ordination with that it was decided to hold two races in harbour. With five races already completed, and a single discard in place, the clear leader overnight was 'Zethar' on 5pts followed by 'Kingfisher on 11pts and 'Wild Bird' also on 11pts - but 3rd on countback. 'Kittiwake' followed on 12 pts. The first race started from the usual line off the yacht club and headed to the first mark laid in the harbour mouth. 24 boats started and, being downwind, arrived pretty much at the same time at the first mark. This was probably one of the most chaotic mark roundings seen for many years in Fowey and one in which each boat has a different version of events! With everyone approaching down river line abreast on port tack there was the inevitable issues with windward boats needing to keep clear and overtaking boats with no rights on outside boats. As the mark closed to the three boat circle there was a reversal of rights with windward boats being overlapped now calling for water. In the end many boats were unable to round the mark on the correct side resulting in a scramble for the majority to get back round. 'Zethar' and 'Kingfisher' kept out of the mess and finished first and second meaning that 'Zethar' had won the championship with a race to spare. However the other podium places were still undecided and with a second discard to come into play much could still change. The final race was set around the same course but this time the fleet was more aware and got round the first mark in a more orderly fashion. 'Kingfisher' took off and was never challenged to secure a very clear win and second overall but third place overall would not be decided until the very end of the race and in the event 'Wild Bird' took that place with a fourth just holding off 'Kittiwake . Full results are given below.

The prizegiving, held at Fowey Gallants Sailing Club, was attended by virtually the entire fleet who enjoyed a tapas meal and enjoyed well-earned post racing drinks whilst applauding their fellow sailors.

The Fowey River fleet has seen a steady growth in numbers in club racing and the larger events such as the class championships over the last few years - not only have numbers increased but the overall standard of racing through the fleet means it is closer than ever and intensely competitive. Whilst there are familiar names at the top of the leader board there are many new faces making their mark and the top of the fleet is working harder than ever to stay ahead.

Club racing continues for the next couple of months in build-up to the annual Fowey Royal Regatta in August where nearly forty boats are expected- not bad for a local one design wooden knockabout! 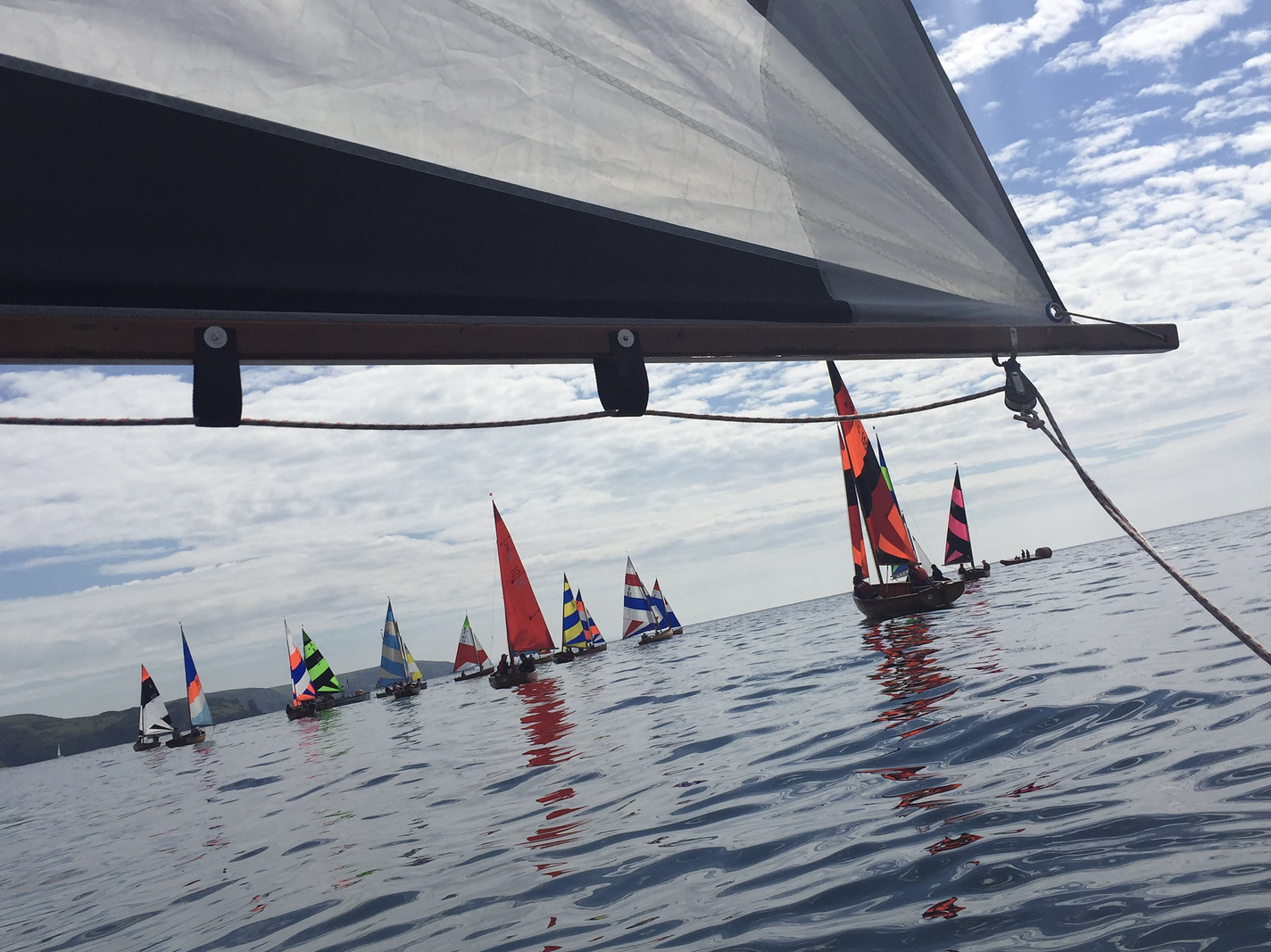 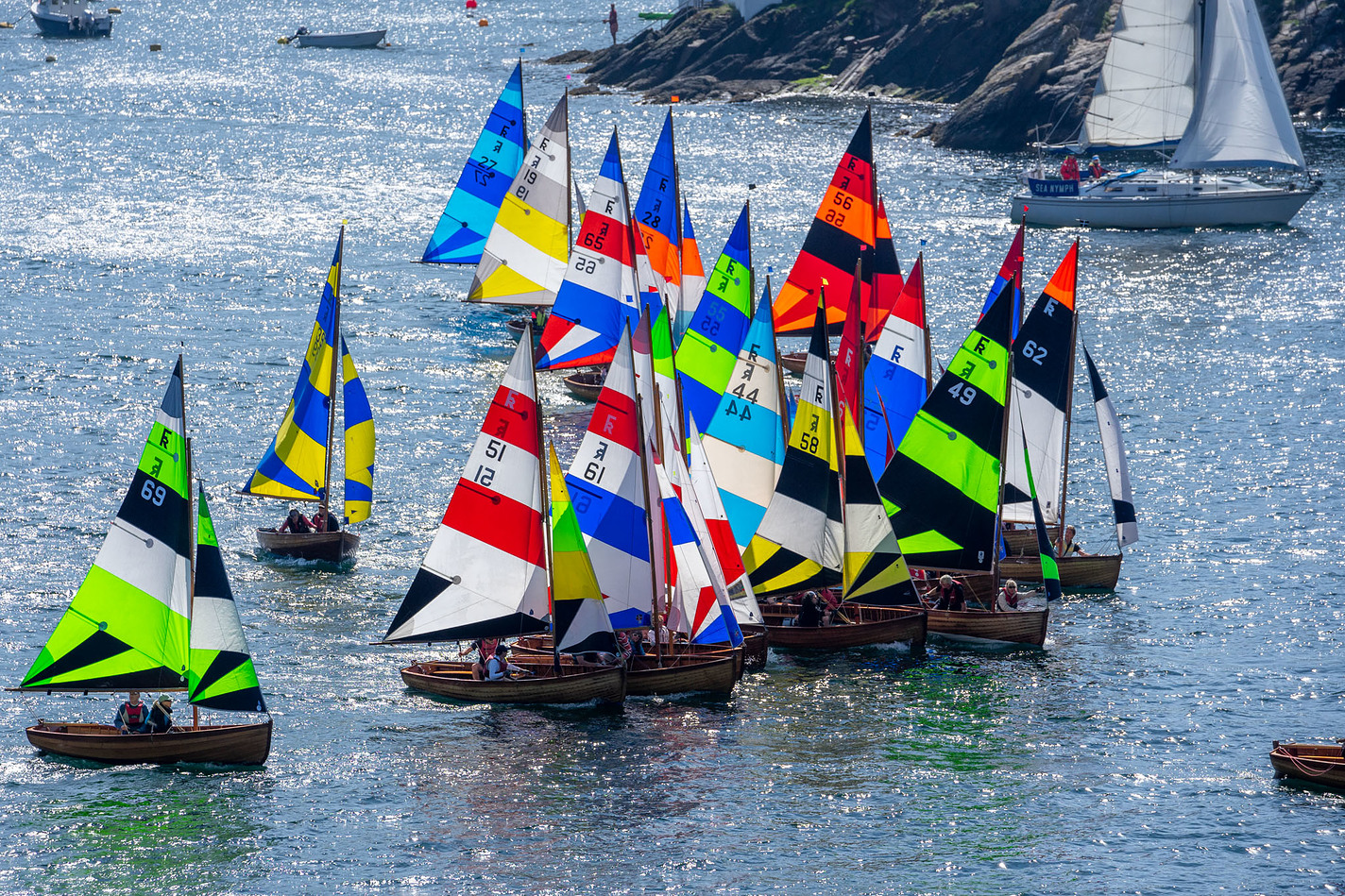